We all know that there is no single correct answer in English. But you can always improve on what you’ve got.

Consider the following two responses to a question about Terry’s judgment of himself as a bum rather than a contender:

Terry Malloy sheds his reputation as a bum when he testifies against Johnny Friendly.

Terry Malloy takes further steps to shed his reputation as a bum when he testifies against Johnny Friendly.

In response one, Terry’s transformation is completed in a single step, whereas the second response acknowledges that there are other factors (occurring both before and after the court testimony) that play a role. The second response also invites you to explore in more detail.

We can now examine the nature of Terry’s transformation. His testimony doesn’t give him the self-worth he seeks. Instead, he is isolated from the community, as demonstrated upon his return home by the rudeness of his neighbour and the reprisals of the Golden Warriors.

To redeem himself in the eyes of the community and to gain self-respect he has to act on his own terms (not under pressure from Father Barry, Edie or the Crime Commission), and this means a violent confrontation with Friendly (he is a boxer after all). Thus it is only at the end of the film that he is able to shed the title of ‘bum’ and replace it with the status of reluctant working mans’ hero. 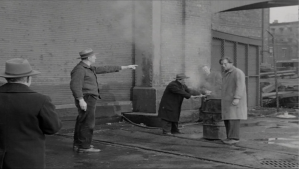 Tip: Keep this in mind when you make blanket statements. When analysing a scene don’t rip yourself off by ignoring what has come before and what will follow in the narrative.

This entry was posted in On the Waterfront. Bookmark the permalink.

4 Responses to What’s the answer?